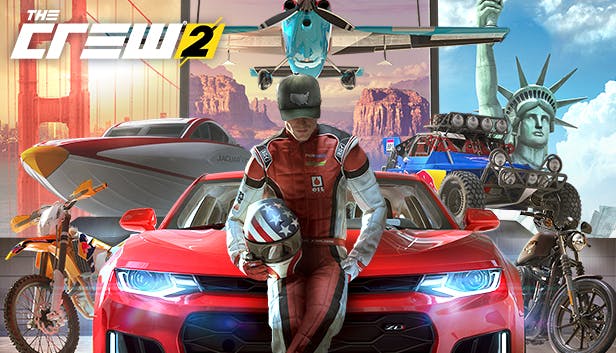 Massive open world? check. Plethora of vehicles to choose from? check. Good mechanics? sort of. Interesting story? not really. Does it all work? Surprisingly yes!

Developed by Ivory Tower and published by Ubisoft, The Crew is a series of racing games that gives you access to the entire United States of America. Yes you read correctly, the entire map is America. When the first game was announced in 2014 people were skeptical, myself included. But the reception was well received for its new spin on the racing genre. The second game in the series, The Crew 2, had an even higher praise than the first. Even with all of the praise gained, the games are not perfect.

Easily the most ambitious map in the racing genres history. The Crew lets you drive from New York all the way to Los Angeles, without any load screens keep in mind. This has never been done, or even attempted at the time. The entire United States is the map, however, it is scaled down for obvious reasons. Being scaled down, the developers were only able to fit 6 big cities; Detroit, Chicago, New York, Miami, Los Angeles, and Las Vegas. They also included minor cities such as St. Louis, Washington, D.C., New Orleans, Dallas, Salt Lake City, Santa Fe, San Francisco, and Seattle. All the cities listed are fully detailed and have their own feel to them. New York feels like a labyrinth full of streets and tall building. While Las Vegas is full of color and neon lights.

In between the main and minor cities are highways and back roads, accompanied by vast landscapes of mountains and greenery. In the E3 showcase in 2013 they kept pushing the feature that you can drive anywhere in the map, the famous quote being “See those mountains there in the distance? You can drive to the tops of those from here.”. The back roads and highways are what connect the entire map, obviously, but they are all unique in there own way. If you do decide to drive across the map in one sitting, it will take on average 2 hours, you will come across at least 3 biomes. The games features heavily wooded areas in Washington state, snow covered roads in the mountains near Salt Lake city, desolate deserts in the Las Vegas region, and palms trees with swamp land in the Florida area. Having all of these differences keeps the game fresh when exploring new regions and doing all the available activities.

The same map carries over from the first game to the second, with some improvements. The biggest in my opinion was boats. For the first time we are able to fully explore the rivers and lakes of America, something we weren’t able to do in the first game. It doesn’t add much to the game, but its just really cool to have.

To this day I am still baffled with how they managed to pull of this map. We literally have a game where we can explore the entirety of the United States, except Alaska and Hawaii.

Being a racing game you have the option of choosing a vast amount of cars. The game features sports cars, street cars, super cars, trucks, and even formula 1 cars. The second game also added boats, planes, and bikes. The cars are all reals cars too, not like GTA with made up car brands. You have the option to pick from almost every car brand out there. From Ford and Audi, all the way to Lamborghini and Koenigsegg, the choice is yours. The selection of cars is impressive, but it still has nothing on the giant that is Forza Horizon. However the car models are almost on par with the Forza series.

The car customization is amazing in these games, I even think its better than Forza Horizon (Please don’t hurt me). You have the option to add tons of body mods to any car of your choice; from aggressively large wings, to front hood scoops that don’t even look good. Another huge portion of customization is paint and decals. The paint options are the generic gloss, matte and factory. But you can also get chromatic colors and pearlescence, these cost a lot however. You also get a large suite of symbols and objects to deck you car out with decals, or if you’re average, pre set ones. This level of customization reminds me of the days when racing games used to go balls to the walls with customization, this is sadly missing from most racing games now (I’m looking at you modern Need for Speed games).

Another huge aspect of the games is car specs. Specs transform you car into different type for different purposes. The Specs are stock, street, dirt, raid, performance, and circuit. Street is used for road races. Dirt is meant for dirt road races. Raid is basically an upgraded version of dirt, its meant for actual off roading not just dirt roads. Performance is also an upgraded version of street. Performance is your car on steroids, its honestly the best way to describe it. All of these specs gives your car a bonus for some areas and a buff in others. For example Dirt will give you better traction and control on dirt roads, the penalty being horrible control on normal roads. Another thing these specs add is different body mods per category, no two specs will look the same. These specs are also not available for every car. Although you can make a Lamborghini off road, which is awesome. These specs is what sets The Crew apart from other racing games, as well as the map but we already discussed that.

The vehicles handling is well thought out. You have the option to customize how you want your vehicles to handle. Just go into the menus and customize every single option, its very intuitive. I looked up certain presets for each option, I went with a sport preset with made the cars handle perfectly.

The map is littered with various things to do and see. When driving on a road you will find various activities that you can trigger by driving through. These activities range from slalom, speed traps, and even out running a zone as quick as possible. Each activity is leveled capped and sometimes requires certain specs to participate in. After completing these you will be rewarded with a vehicle part to equip to your car. These include new brakes, better handling, engine upgrades, and even new shocks. Each vehicle part will add to your cars level, you want you car level to be as high as possible. You can replay these activities as much as you want to get higher quality parts for your car, they go from bronze to gold. There are hundreds of these scattered around the map for you to find, this rewards players for exploring this massive map.

Being a racing game you can participate in races across the map with A.I and real players. Each race requires a certain car level and spec, so you can’t use the same car for every race.

The story in the first game is very good, as with every racing game. Your character is working with the FBI to take down a illegal racing rings around America. The voice acting is bad, and the characters are even worse. Definitely the low point of the game. However, with the second game, they through out the generic story for a no story. The second game is about you, the player. You are trying to make a name for yourself with a nation wide racing festival, similar to Horizon festival form the Forza games. You complete challenges to gain followers and become number one. You also have an apartment where you can view all your cars, and even customize your player. The endgame in the The Crew 2 is beating the number one followed person in each spec group.

What I would like to see in a third game would be a different map. Having the entire map of Europe with all the major cities would be amazing, they proved that it could be pulled off already. Also having a larger amount of vehicles would be a good addition, Forza had hundreds while The Crew has only a fraction that Forza had.

What are your thoughts on this game series?